Deputy Jeff G. Watson died Aug. 4, 2013 when his patrol unit collided with another vehicle whose driver pulled into his path.  Watson, 41, was responding to an emergency call for assistance from another officer with his patrol unit's emergency lights on, when an impaired driver turned into the path of Watson's vehicle.

Watson was the fourth St. Charles Parish Sheriff's Deputy to die in the line of duty during the Sheriff's Office's 200-year history, and the first since 1982.

Watson, a Destrehan resident, had been a St. Charles Parish Sheriff's deputy for seven years, and had previously served as a Jefferson Parish Sheriff's deputy. Hundreds, including police officers from around the region, attended a memorial service on Aug. 8.  He was survived by his beloved wife and step-daughter. 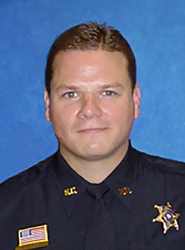