Three short years after his law enforcement career began, Deputy James Alan Arterbury, 24, was killed while responding to a disturbance at a local bar.

On July 4, 1973, several subjects in the bar room jumped the deputy and a scuffle ensued. Deputy Arterbury was shot in the back with his own gun. He died several hours later at the St. Charles Parish Hospital. James A. Arterbury was the second St. Charles Parish Sheriff's Office to be killed in the line of duty. His memory is honored at the National Law Enforcement Officers Memorial on panel 4E-7. 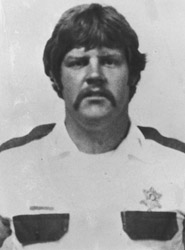